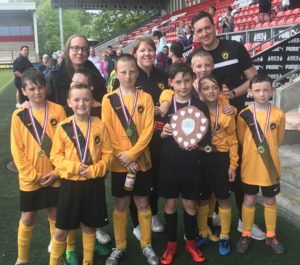 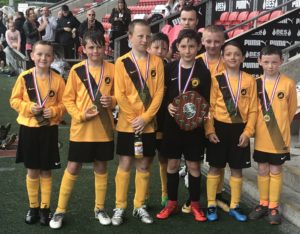 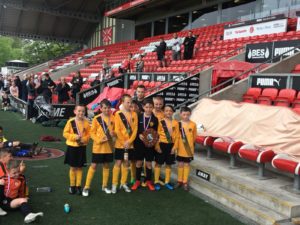 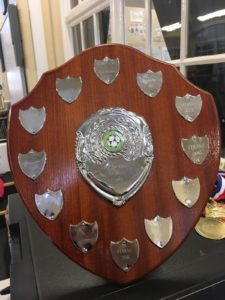 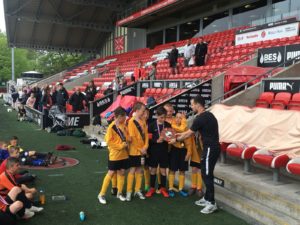 Wow!!! 21 years of waiting finally came to a stunning end on 25th May 2018, when Chaucer Community Primary School etched their name on the League Finals trophy again. In the pouring rain, the team successfully defeated Sacred Heart 2-1 in the semi-final, with an audacious finish from Cameron, a well executed finish from the forever-running Horatio, and some outstanding goalkeeping from Zac, earning the right for the team to play in the final.

Urged on by the very vocal travelling Chaucer Army, the team put in a well disciplined performance to seal the massive victory against a spirited Larkholme team in the final. The 1-0 victory sparked jubilant celebrations from the players and supporting fans alike. The goal, scored by the impressive Horatio, taking his tally for the day to 2 goals and once again, some superb saves from the goalkeeper brought the long wait for the trophy to an end.

‘From front to back the team were exceptional and thoroughly deserve the accolade of League Finals Champions,’  said an ecstatic Miss Soper, the teams Manager.

‘The day was outstanding, from the fans to the football played, this team deserves this moment for all their hard work throughout the season,’ said a jubilant Miss Kendrick, first team coach.

‘The team went out and did exactly what was asked of them, “give 100%, leave everything on the pitch and the rewards will come”, and didn’t they just!’ said relieved coach Mr Holt.