The school team have had a very successful half-term. First they played at Bloomfield Road in the Elliot Cup coming third. Secondly they played in a six-a-side tournament and lost in the semi-final, coming third overall. Finally they played at Highbury Stadium in the league finals coming second against Stanah.

In all competitions the children who represented the team were fantastic. Not only did they give 100% in every game, they were respectful and showed true sportsmanship. Everyone at Chaucer are proud of their achievements this year. Well done! 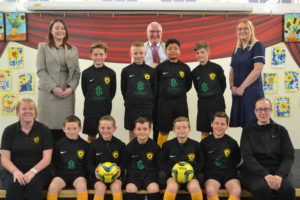